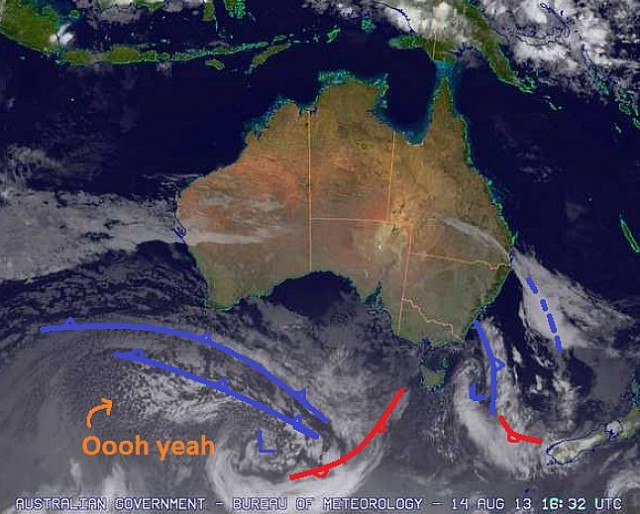 From the Grasshopper at Mountain Watch

Ridgey-didge today, with high pressure clearing out the remaining flurries early, allowing us to take a quick breather today and tomorrow. However by tomorrow afternoon the northerly winds will be cranking across Victoria and it looks as though we grab some pre-frontal rain there before midnight.

The rain then pushes through into NSW and we should see everyone pick up about 20mm. The good news is the cold air steamrolls through pretty quickly and then we have snow showers for the rest of the day. The bad news is it’s not super cold, so the snow may only lower to around 1600m. I’m banking on about 10cm above 1600m by 9am Sunday.

On Sunday we’ll have a few snow showers to start, but the real action is with a cold front from late afternoon, heading through to NSW by evening. Once again, it’s not super cold yet, so plan for 10 to 15cm above 1500m by 9am Monday morning, a bit less below.

On Monday we should theoretically be hammered by persistent showers and strong westerlies. I can see anywhere from 15 to 30cm building up, but we’re still five days out from this happening so we need to keep our pants on for now – if the low that’s delivering this bounty slips a little further south than forecast and the high to the north-west pushes in a little stronger then it could dry up quicker.

Tuesday is the same deal. I think we will see another 5 to 10cm as those westerlies keep a coming, but it could dry up a bit quicker and fail to deliver.